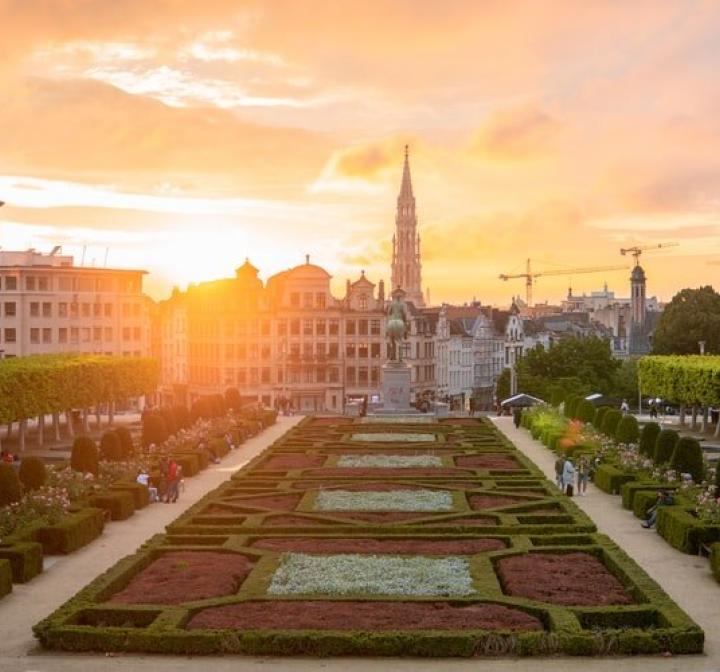 What should you do in Brussels? 20 must-sees when visiting Brussels

Visiting Brussels for a weekend? Discover our suggestions for unmissable monuments, museums, places and activities in the Belgian capital.

Ah, Brussels!!! With its waffles, chocolate and the famous Manneken-Pis! Everyone's heard of it.  But did you know that the Belgian capital is full of surprises? Combining the charm of the old Gothic neighbourhoods with the vibrant dynamism of the modern districts, Brussels invites you to explore its treasures during your stay.

It would be a shame to visit Brussels without seeing the world-famous statue of the "little boy weeing", which has become a symbol of the city. When you do see him, you might well get a surprise, because he's only 55 cm tall!

All through the year, on certain occasions or annual festivals, the Manneken-Pis gets dressed up in a costume. This tradition dates back to 1698 and the famous statue now has a  wardrobe of over 1000 costumes.

Don't forget to visit his lesser-known female counterpart, the Jeanneke-Pis, located near the Grand Place.

Surrounded by majestic 17th century architecture, partly destroyed by the French bombardments of 1695 and then rebuilt, the Grand Place is a must-see during your stay in Brussels.

This is where you'll find the most photographed buildings in the city. Among them are the Town Hall, the King's House, as well as the forty or so guild houses, including La Brouette (grease-makers guild), Le Roy d'Espagne (bakers guild), and Le Pigeon (painters guild).

The Grand Place is the historical and commercial heart of the Belgian capital and the home of many festive and cultural events. Every two years, on the weekend of 15 August, it hosts the Tapis de Fleurs, a carpet of flowers festival, and is decorated with thousands of multicoloured begonias.

While you are on the Grand Place, take the time to enjoy a beer on one of the terraces while you admire this jewel of gothic architecture.

Officially listed by UNESCO as Intangible Cultural Heritage, Belgian beer boasts a wide variety of flavours. With white, blonde, brown or amber, abbey beer, Pils or Gueuze to chose from, you are bound to find one you like.

If you are interested in beer, Brussels is the ideal city to learn more! Brussels is brimming over with museums about the history of Belgian beer. On the Grand Place, visit the Arbre d’or, formerly the headquarters of the brewers' guild, now transformed into the Beer Museum.

Don't miss the Brussels Gueuze Museum, located next to the Cantillon family brewery, which was founded in 1900, where you will have the opportunity to taste an authentic traditional Gueuze-Lambic.

What could go better with your beer tasting than the famous Belgian fries whose reputation, a source of national pride, has spread throughout the world! The fries are usually served in cones to be enjoyed while strolling, and you will find many chip stalls dotted about the streets of the city.

If you're not a fan of fries and eating on the go, you could also try the traditional dish of “moules frites” (mussels and fries) on offer in many Brussels restaurants .

The Domaine Royal de Laeken, a vast green space in the heart of Brussels, is the ideal place to recharge your batteries while appreciating the landscaped features.

As you stroll along, stop to admire the Chinese Pavilion and the Japanese Tower, built for Leopold II and which, together with the Museum of Japanese Art, form the Museums of the Far East.

Don't leave the park without taking a look at the Laeken Castle, long the residence of the Belgian monarchy, and the magnificent Royal Greenhouses, which contain a significant collection of exotic plants and flowers. Please note that the greenhouses are only open to visitors for a fortnight between mid-April and early May.

Built for the 1958 Universal Exhibition, the Atomium is as much the icon of Brussels as the Eiffel Tower is of Paris. This building, halfway between sculpture and architecture, is the symbol of modernism and scientific discoveries

Made up of nine spheres connected by 20 tubes, the structure weighs nearly 2,500 tonnes and represents an iron atom magnified 165 billion times.

The six spheres are open to the public for exhibitions and provide a 360° view of Brussels and its surroundings. At 102 m high, the highest sphere offers a breathtaking panoramic view of Brussels.

Take advantage of your stay in Brussels to visit the Mini-Europe park and admire the most beautiful cities and landscapes of Europe as you have never seen them before! Discover the wonders of Europe on a scale of 1:25 in this 24,000 m2 park, with no fewer than 350 monuments which are just like the real thing.

Relive your childhood and immerse yourself in an entertaining and educational trip!

It was in Brussels in 1929 that Hergé created Tintin and his faithful dog Snowy to life. While depicting the famous boy reporter's travels to the four corners of the globe, Hergé often also included images of Brussels in the background. Studios Hergé will help you follow in the footsteps of Tintin in Brusselsusing a route available on Google Maps.

If you like Tintin, you are probably a fan of comics. In that case, a visit to the Musée de la BD comic book museum is essential! This Brussels museum is one of the biggest in the world to be dedicated exclusively to comics.

To continue your themed tour, the city of Brussels has created a comic book trail that pays tribute to the big names in Franco-Belgian comic books with a series of giant murals around the city.

This Gothic cathedral, whose construction began in the early 12th century, was originally a Romanesque church dedicated solely to Saint Michael. It only took the name Saints-Michel-et-Gudule in 1047 when the relics of Saint Gudula were brought there.

Extensive restoration work in the 1980s uncovered the remains of the church and the Romanesque crypt beneath the current-day choir.

The Cathédrale Saints-Michel-et-Gudule is one of the most majestic sights to see in Brussels. Its impressive architecture will inspire a moment of quiet reflection.

Inaugurated in 1847, the Galeries Royales Saint Hubert was one of the first shopping arcades to be built in Europe. They consist of a set of three passages covered by a glass roof almost 200 m wide: the Galerie de la Reine, the Galerie du Roi and the Galerie des Princes.

Located not far from the Grand Place, they are home to many shops, restaurants and even a theatre and an art house cinema. It is an ideal place to do some shopping combined with admiring the architecture inspired by Italian palaces.

As famous as Belgian beer, Belgian chocolate originated in the very heart of Brussels thanks to Jean Neuhaus. He was a pharmacist who used to coat medicine in chocolate to cover up the unpleasant taste. In 1912, he had the brilliant idea of replacing the medicine with a fresh cream filling. The Praline was born!

For chocolate lovers, Brussels is filled with opportunities to discover its history, its production and to enjoy it in all its forms.

Fact-seekers can visit the Belgian Chocolate Village or the Choco-Story Museum. And visitors with a sweet tooth can discover the city's chocolate makers, some of whom offer chocolate workshops.

The Sainte Catherine district, the former port of Brussels, is one of the most lively areas of the city. Every day, on the Place Sainte Catherine, near the church of the same name, there is a busy fruit and vegetable market, especially popular at lunchtime.

The people of Brussels still call it the Fish Market, even though there aren't any fish markets on the square any more. On the other hand, because of its past as a port neighbourhood, there are still a lot of restaurants where you can eat the best fish and seafood in Brussels.

While you are in the Sainte Catherine district, why not take a slight detour to the Place de la Bourse to admire the magnificent Palais de la Bourse including several sculptures by Auguste Rodin.

The Marché aux Puces flea market has been held since 1873 on the Place du Jeu de Balle in the heart of the Marolles district. If you are keen on antiques, you can catch the market every morning. Visitors will find a wide range of antique trinkets, furniture and vintage clothes.

Take note, if you want some good bargains, it is recommended that you arrive very early! This timeless market, with its friendly atmosphere, welcomes strolling and bargaining along its aisles. Why not take the opportunity to relax in one of the classic Brussels cafés that surround the square?

The Palace stopped being a Royal Residence in 1831, and subsequent kings have lived in the Laeken Palace instead. Today, the Royal Palace in Brussels is the seat of the Belgian constitutional monarchy and the main workplace of the King. It houses the offices of the King and Queen, reception rooms, and the offices of various ministries.

The palace is open to visitors from 21 July, the Belgian national holiday, until early September. If you have the opportunity, do visit to admire the monumental Escalier d'Honneur and the many richly furnished state rooms.

Take advantage of this visit to walk through the Royal Park opposite, the home of the Theatre Royal du Parc.

Just a stone's throw from the Royal Palace are the Musées royaux des beaux-arts. Comprising 6 museums, they cover the history of fine art from the 15th to the 21st century with a collection of over 20,000 works:

Whether you are an enthusiast of modern and contemporary art, a die-hard Flemish primitives fan, or prefer the Belgian surrealist René Magritte, this jewel of Belgian culture will have something for you to love.

The Parc du Cinquantenaire was built in 1880 to commemorate the 50th anniversary of Belgian independence. It covers a huge area and includes gardens, monuments and museums which host many events throughout the year.

In the centre of the park are three triumphal arches which you can climb free of charge, with a breathtaking view of Brussels from the top.

Located in the European quarter, this is a very popular place for walking and relaxing.

You can also stop and visit the very informative Royal Museums of Art and History and the Royal Museum of the Army and Military History.

To complete your exploration of European democracy, you can be impressed by a visit to the hemicycle debating chamber and the European Council at the famous cross-shaped Berlaymont building.

Founded in 1201, the Abbaye de la Cambre is a former nunnery that was home to nuns of the Cîteaux Order. Closed down after the French Revolution, it now houses the colleges of the École nationale supérieure des Arts visuels, the Institut géographique national, and the parish of Notre-Dame de la Cambre and Saint-Philippe Néri.

The abbey is surrounded by beautiful formal gardens which are well worth a visit to enjoy their sunshine and serenity.

And if you want to spend a little more time relaxing in nature, go on to the Parc du Bois de la Cambre located not far from the abbey. It is the perfect place for a picnic by the lake while listening to some music.

What would a stay in Brussels be without a delicious waffle?

It's very important to note that we are talking about the Brussels waffle here, and not its smaller counterpart, the Liège waffle, which doesn't need any toppings

The Brussels waffle is crisp and rectangular and absolutely has to have some toppings.  Icing sugar, whipped cream, chocolate...whatever tickles your tastebuds!

Bon Appétit, and have a marvellous trip!

How to get there
Free cancellation 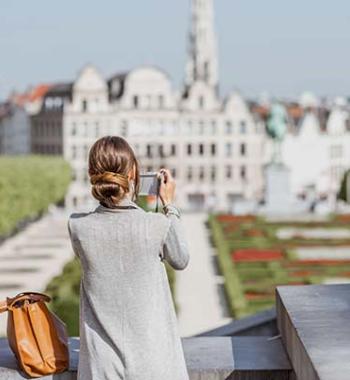 More to discover in Brussels 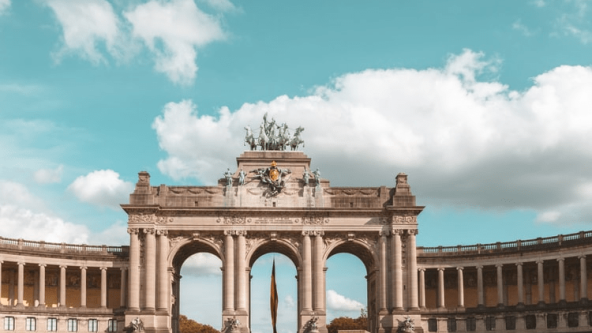 Best quarters to visit in Brussels
Located not far from Paris and London, Brussels is the perfect European get away. Being a great and ideal city...