All you need to know about Père Lachaise cemetery

The largest Parisian cemetery located in Paris’ arrondissement, is the capital’s cult and ineludible place. More than 60,000 people rest there including many celebrities and historical people. The Père Lachaise cemetery houses the tombs of Molière, Oscar Wilde and Jim Morrison. A tourist place more than a simple cemetery

Each year, the Père Lachaise cemetery welcomes more than 3.5 million visitors and is certainly the most visited cemetery in the world, paradoxical for a place that is home to nearly 70,000 deceased people.

Its name pays tribute to Louis XIV’s confessor priest, François d’Aix de La Chaise, called Père Lachaise. This site, classified as a historical monument, was opened for service in 1804. Only welcoming a few graves at that time…

In the past, Parisians did not wish to be buried in the heights of Paris, a poor and popular neighborhood. It was not until the transfer of Molière and Jean de La Fontaine’s graves in 1817 that the cemetery found its reputation. From then on, the cemetery saw the number of graves increase in no time. There were no less than 30,000 in 1830.

A Cemetery in the Heart of French History

At the end of the 19th century, the Père Lachaise cemetery was the site of a civil war between the Communards and the Versaillais during the famous bloody battle of May 1871.

The people of the Commune were surrounded in the heart of the cemetery, on one side by the Prussians and on the other by the Versaillais. The Mur des Fédérés in the cemetery’s surroundings is a testimony of this famous fusillade.

If you go to the Père Lachaise, you will see a memorial plaque on the wall, which has become famous and iconic. You will also have the opportunity to walk by several war memorials paying homage to foreign fighters who died for France during World War I and II.

What tombs to visit?

The largest necropolis in Paris is home to hundreds of celebrities and people who have marked our history. Some tombs are open to the public and everything is set up so that the cemetery can preserve its finest jewels. 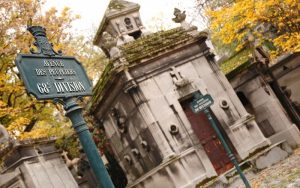 We could not name them all, but big names in film, comedy, politics and the army, are buried in the Père Lachaise cemetery. As for the colombarium, we find the funerary urns of many celebrities from the crematorium. The urns of the Greek singer Maria Callas, the president of the Council Pierre Mendès France and the member of the resistance Jean Moulin, are there.

Like many monuments in Paris, the Père Lachaise cemetery has inspired many painters, singers, filmmakers and writers.