European stereotypes: what do we really think of each other?

There’s no denying that there’s always been stereotypes associated with most European countries, but what do we actually think of each other? The British drink tea and eat scones. The French wear stripes, onions and berets and the Italians? Well, they are passionate, pasta munching gods. There’s no denying that there’s always been stereotypes associated with most European countries, but what do we actually think of each other?

Is there a country who has a worse temper than most? Which country is the most generous? And who will have you laughing the hardest?

We asked respondents across the UK, Germany, Spain, Italy and France to share their insight, and the results were interesting to say the least.

Needless to say, the following content is packed full of stereotypical assumptions. However, you can dismiss this as being satirical Great British humour.

And now for the results… 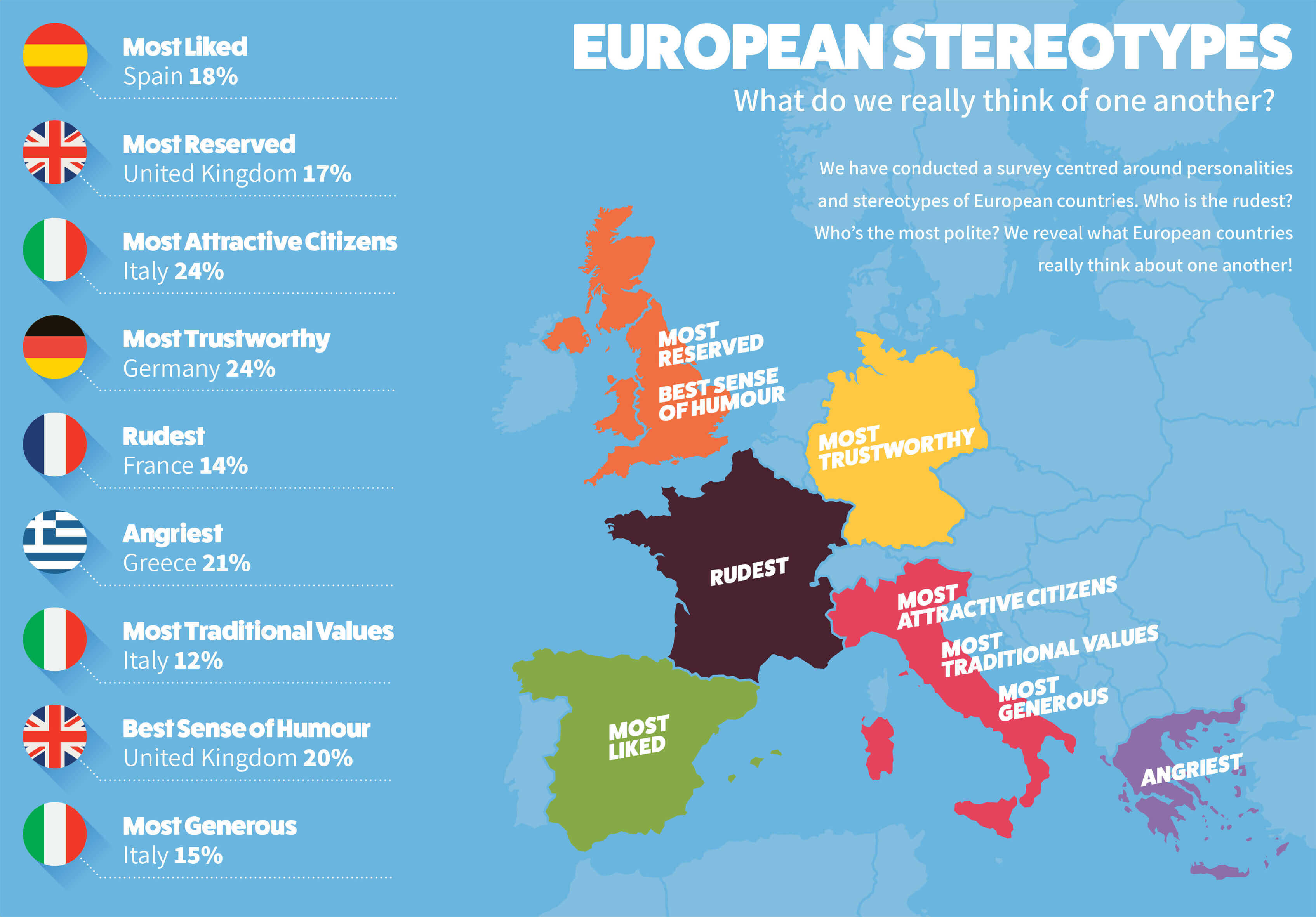 So firstly we say a huge congratulations to Spain, who, according to our results is the most liked country in Europe with 18% of the vote. Sangria, tapas and Flamenco dancing; what’s not to like?

Italy didn’t fair too badly either as it is dubbed the most attractive country in Europe with 24%. It seems that Italy is the country that just keeps on giving (literally) as they’re also the most generous…bravo!

If you manage to find yourself an Italian stallion or bellezza, then you best be prepared to embrace their extended family as your own. According to 12% of survey respondents, Italy is the European country that has the most traditional values.

It would seem that our European counterparts don’t quite know what to think about the UK. Our ‘stiff upper lip’ and general awkwardness (think Hugh Grant in any chick flick you’ve ever seen) has earned us the title of most reserved nation. In comparison to the forthcoming nature of citizens from Spain and Italy, it’s probably an understandable assumption. And the good news? We are a country of comedians. Yes, our quick wit and well-placed sarcasm has the rest of Europe in stitches!

Ms Merkel has helped Germany gain the title of most trustworthy European country. With 24% of the vote, Germany is the clear front runner. As Germany accounts for 28% of the euro area economy, perhaps it’s a good thing that they’re pretty reliable.

21% named Greece as the angriest country in Europe. Since emerging as the biggest casualty of the financial crisis in the late 2000’s, there’s been plenty to shout angrily about if you’re a Greek citizen. With tough austerity measures set to continue, maybe it’s time to cut Greece a pitta slack.

Now onto the rudest country. It’s probably no surprise that France; lovers of baguettes and smelly cheese, emerge with this title. It’s a widespread stereotype that lives on. In fact, even the French respondents rated themselves as the rudest, which ironically, is quite polite of them.

So, what if we break the results down?

Let’s pretend it's Eurovision…we’re going to hear from the UK, Germany, France, Italy and Spain, to see how they voted. 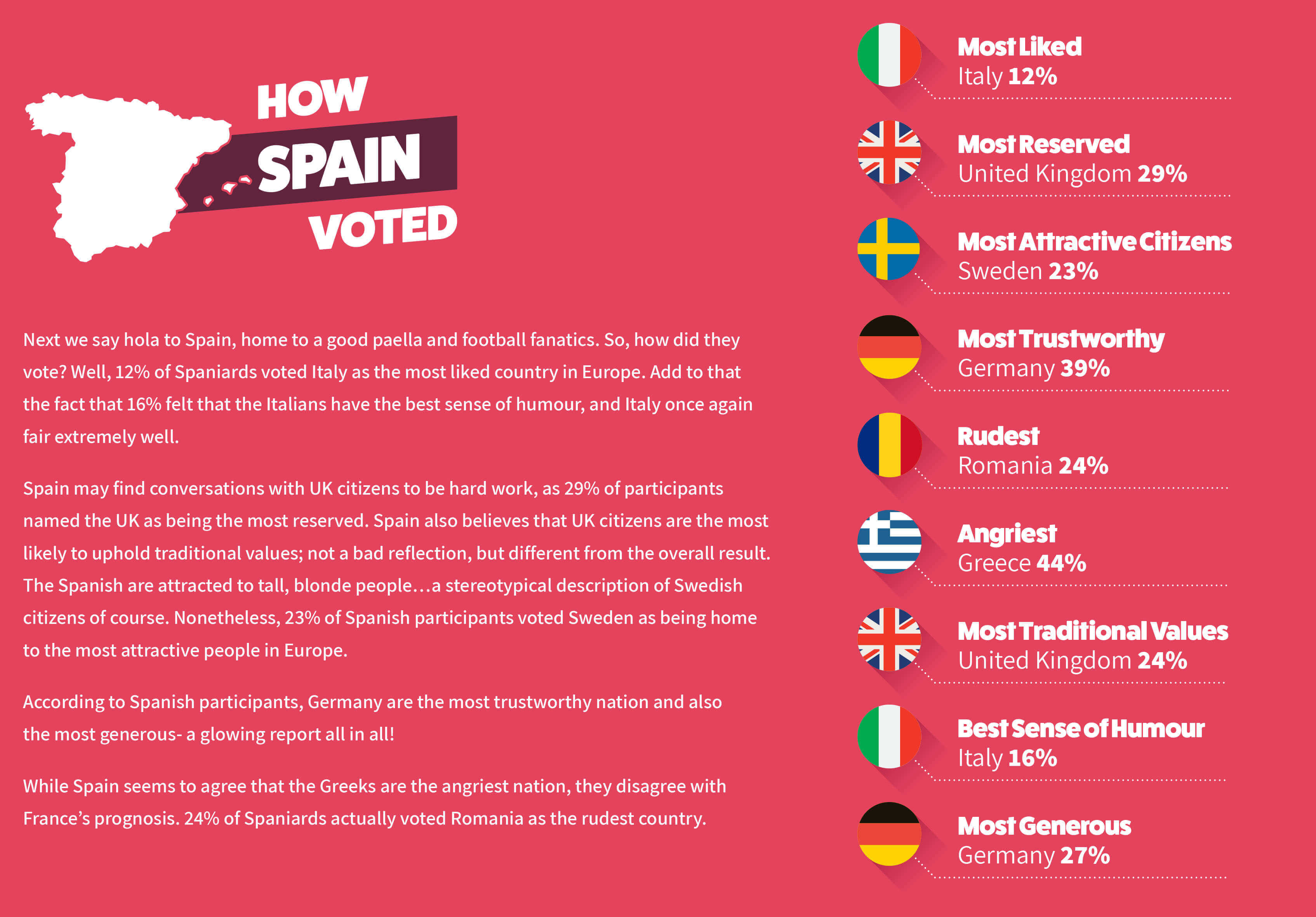 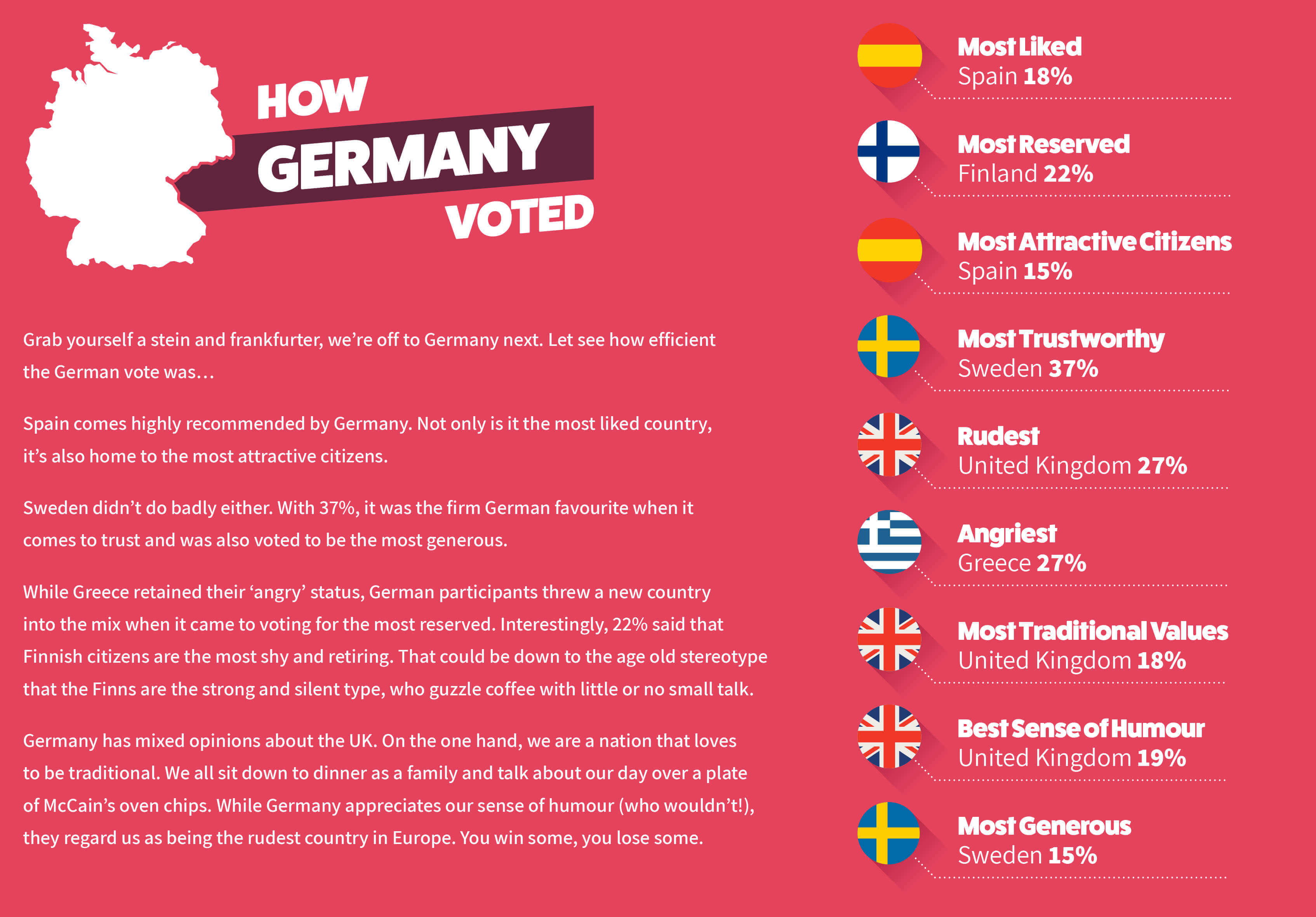 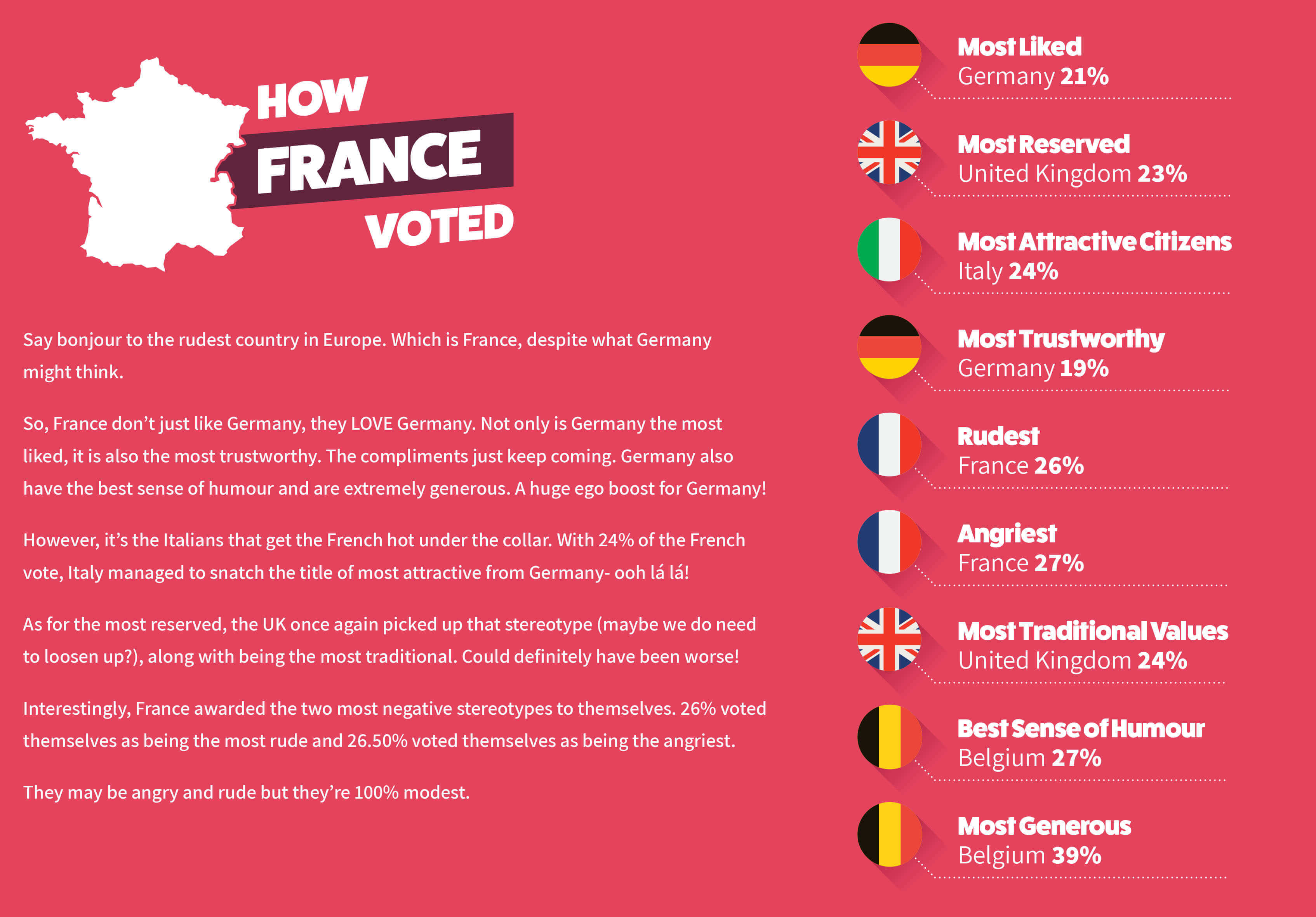 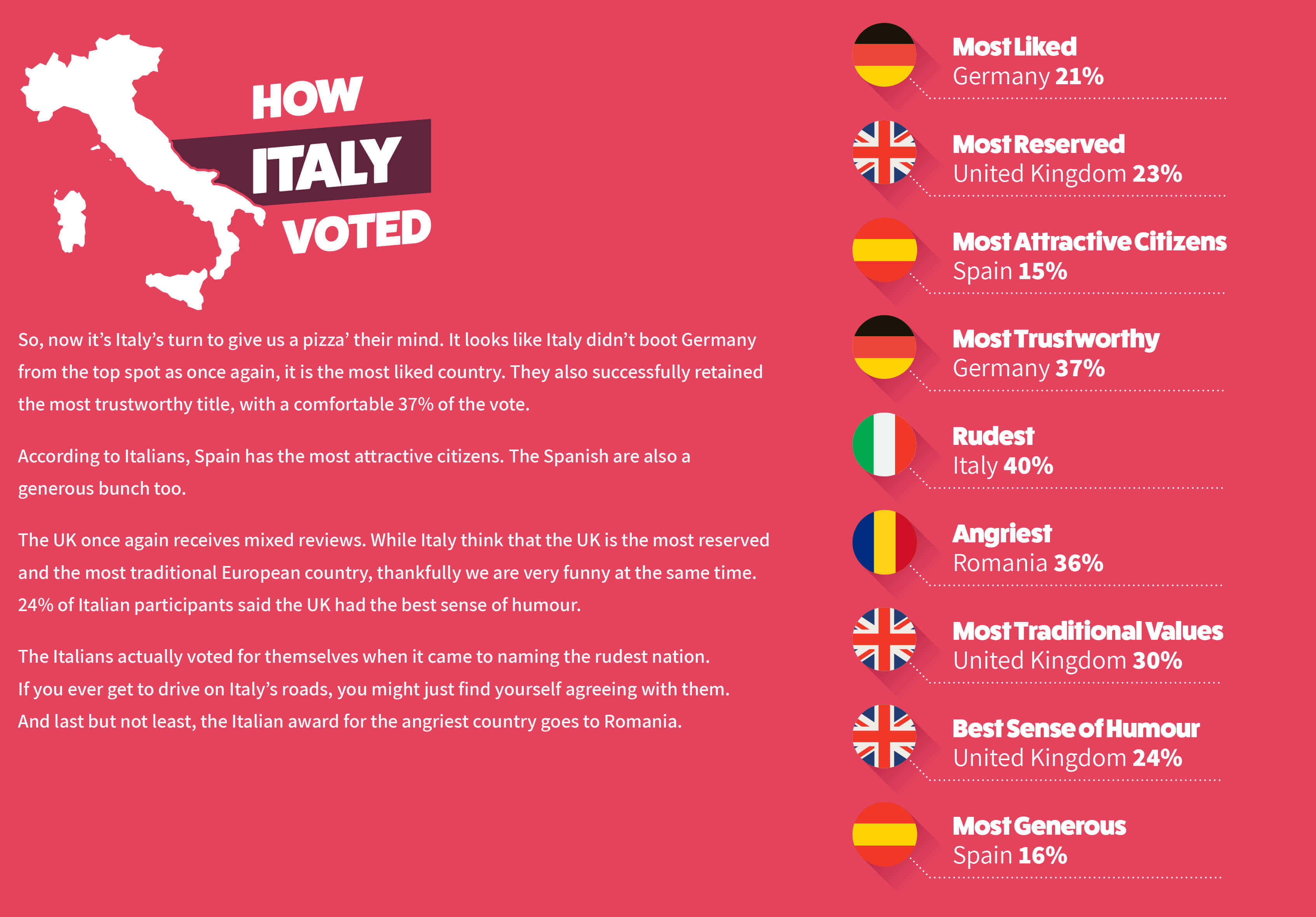 So, there you have it; here’s what we really think of each other. What do you think of the results? Is Spain really the most liked country? Is the UK really THAT funny? Reach out and let us know what your thoughts!

This survey is based on survey results taken from 2000 respondents. Participants are located across UK, Spain, France, Italy, and Germany. An even sample of responses was collated for each country.