Top Things to do in Windsor : 10 ideas to enjoy the city

Located 40 km from London, Windsor is one of England's most royal towns, as it is home to one of the castles of the British royal family. Visit Windsor with our Windsor Discovery Tour and find out about the main tourist activities in the town in our article. During your visit to Windsor, you can't miss Windsor Castle. This royal residence is strongly associated with the English and succeeding British royal family, and embodies almost a millennium of architectural history.

The castle was built in the 11th century. It is the longest-occupied palace in Europe. The reigning monarch has been living in the castle since the time of Henry I, whose reign took place between 1100 and 1135.

Many rooms are open to the public, allowing you to get even closer to the royal family. When you enter the courtyard of the castle, you quickly get a sense of the royal British atmosphere, right down to the lamp posts with their crowns.

It is easy to imagine the Queen living there. To know if she is in residence, simply look at the flag flying over the castle. If it is the Royal Standard, the Queen is around! 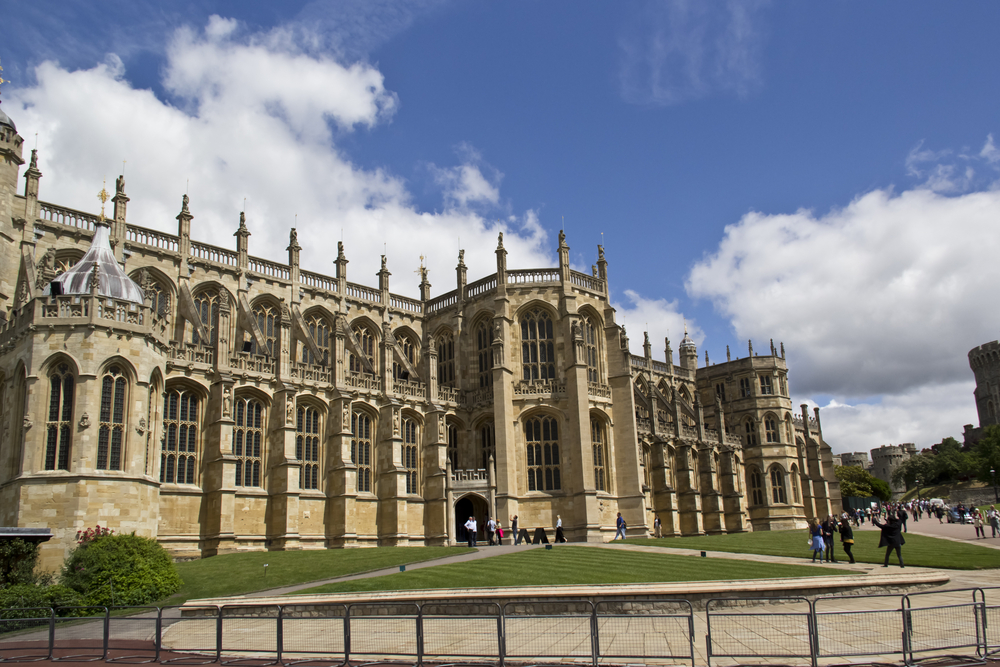 On the roof of the chapel you will see 76 statues standing on the pinnacles. These are the "Queen's Beasts" representing 14 heraldic animals corresponding to the Royal supporters of England. Among them, you can distinguish the lion of England, the red dragon of Wales, the panther of Jane Seymour, the falcon of York, or the white stag of Richard II.

The chapel has also been the scene of many royal services, weddings and burials. Great Park is one of those unique parks that stretches over 2,000 acres and offers stunning views of the city and castle, including the Long Walk, which the royal party took on Meghan and Harry's wedding day.

Red Deer are easily spotted roaming freely around the Deer Park enclosure. The deer are accustomed to seeing visitors walking around, and will remain fairly close, often posing nicely for photographs!

Located on the edge of the Home Park and just a short distance from the beautiful Great Park, the Windsor Farm Shop opened in 2001 at the instigation of the Duke of Edinburgh to support small businesses in the area. The shop was created by converting Victorian garden sheds and constructing two new buildings which became the Farm Shop and the Coffee Shop.

The shop sells high quality goods and produce from the Royal Estates, Windsor Great Park and other small local suppliers. The shop is particularly well known for the quality of its meat. All beef, pigs and lambs have been fed naturally and are traceable to the farms where they have been reared. The Farm Shop also makes its own sausages.

The Coffee Shop, with its large terrace, also has a very good reputation, both with tourists and locals. It offers a wide range of cakes, hot drinks and cooked-to-order lunches.

Frogmore House has been in the royal family for almost 300 years, having been purchased by King George III for his wife Queen Charlotte in 1792.

It’s a 17th-century English country house surrounded by 140,000m² of secure grounds, 4,000 trees, lakes and bridges. At the heart of the property is the Royal Mausoleum, built between 1862 and 1871. It houses the tombs of Queen Victoria and Prince Albert.

The Frogmore Estate is open to the public on three Charity Open Days and all proceeds go to charities. The rest of the time, it is a private residence where royal receptions are regularly held. In 2018, Frogmore Gardens hosted the wedding reception of Prince Harry and Meghan Markle.

With its extravagant colonnade, the Windsor Guildhall, built in the 17th century, is one of the most stunning structures on Windsor's main street. In the past, a corn market was held in this historic building.

The building of the Guildhall was entrusted to Sir Thomas Fitch and then, on his death, to Sir Christopher Wren, architect of St Paul's Cathedral in London. The last stone was laid in 1689.

The façade is a fascinating mix of elements including a red brick pediment, an arcade and a pair of pink portals. And the building looks even more magical at night with its colonnade illuminated by golden light.

It is possible to walk through the various halls of the building every day, but also to get a glimpse of its sumptuous interior via the online virtual tour. The Council Chamber, which seats up to 100 people, is decorated with portraits and brass chandeliers falling from the ceiling.

Today, Windsor Guildhall is the town Hall of Windsor as well as a museum. The Windsor and Royal Borough Museum was officially opened in 2011 by Queen Elizabeth II. The Guildhall regularly hosts wedding ceremonies and events. Prince Charles and Camilla Parker Bowles and Sir Elton John and his partner David Furnish were married here. 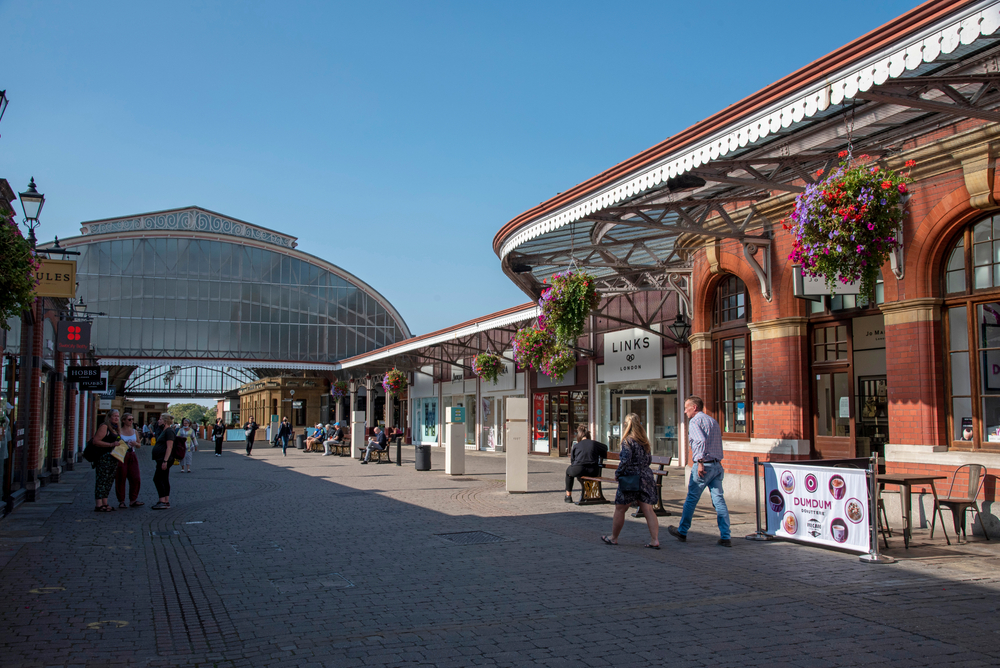 Windsor & Eton Central station is a railway station in the United Kingdom, and is one of two termini serving the town of Windsor in Berkshire, England. Although a small part still functions as a railway station, the station structure has been largely converted into a shopping centre, known as Windsor Royal Shopping. It is located on the High Street, almost opposite Castle Hill, the main entrance to Windsor Castle.

Located north of Windsor on the other side of the river Thames, Eton is a town that rivals its neighbour in elegance and contribution to British culture and history. This picturesque town is dominated by the famous Eton College, where Princes William and Harry were educated. A walk along the river and a guided tour of the school will take you to the major sites of the city.

Several blocks west of the Thames, the high street is flanked by red brick Tudor buildings. Eton High Street's shops include charming art galleries, florists, bookshops and vintage pubs, as well as high-end fashion boutiques. Along the way, why not indulge in some traditional chocolates and fudge?

Guided tours of the prestigious school are available on Fridays from May to early September. The guide will take you through the school grounds, the upper and lower schools and the wonderful College Chapel. Afterwards, you can visit the Natural History Museum at Eton College and see the delicate lantern known as the Burning Bush. The history of this remarkable institution is further revealed in the Museum of Eton Life.

Founded in 1440, this independent boarding school has educated many of Britain's leading figures. You can examine the list of authors who have graced its halls, such as writer George Orwell, James Bond creator Ian Fleming and novelist Aldous Huxley, who taught there. Modern stars such as Hugh Laurie, Tom Hiddleston and Damian Lewis are also in the books. 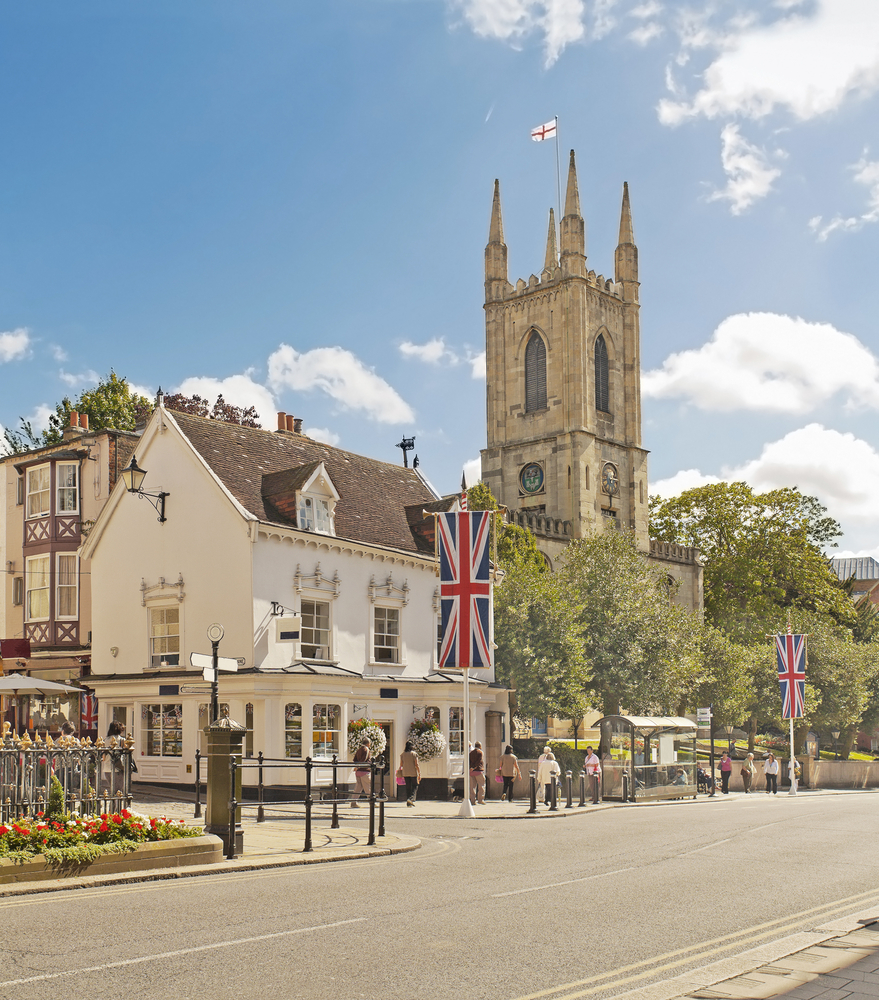 Located on High Street, Windsor Parish Church is dedicated to St John the Baptist. The church was rebuilt in the Gothic Revival style in 1822. It is the civic church of Windsor, and many of Windsor's mayors are buried in the church and churchyard.

The church has beautiful architecture with many elements of the earlier building. To the right of the main steps from the High Street is a replica of the "lion and floriated cross" of Idonea de Audele, Abbess of Burnham mounted on the original gravestone. In the west gallery you can also see a large painting by Francis Cleyn of the Last Supper.

Legoland Windsor is a family theme park dedicated entirely to the little Lego brick. It covers an area of approximately 29 hectares and first opened its doors in 1996. Since opening to the public, it has become one of the most popular theme parks around London, welcoming over two million visitors a year.

Legoland is open from mid-March to early November. The opening hours are from 10am to 5pm until 7pm depending on the season.

To continue your discovery of the region, come to London and explore London's top landmarks thanks to the Tootbus London Discovery tour. Enjoy the amazing Jubilee special tour on the yellow route on selected days.